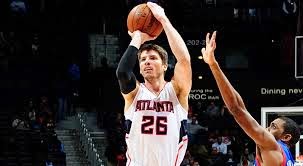 These rankings are based off potential, overall skills, prior history, and credentials.


1. James Harden: Harden starts this list off for obvious reasons. Kobe has been injury riddled.

D-wade is still elite, but its clear the torch has been passed to Harden, who is a bonafide MVP candidate this season.

2. Klay Thompson: Thompson is just a terrifically gifted scorer. He can score from anywhere
on the court, and plays great defense. You could even say that if he weren't playing alongside Stephen Curry his numbers would be even better, and he would actually be ranked Number One.

3. Dwyane Wade: D-wade is like a fine wine. He ages well. The man known as "flash" still
has the goods at age 33. He's fought through some injuries this season and seems primed into carrying his Heat team to the playoffs after Chris Bosh was lost for the season.

4. Jimmy Butler: I like Butlers game. He lets the game come to him. He picks his spots perfectly, but he also knows when to be aggressive. Add some great defense, and you have one of the better 2 way guards in the NBA.

5. Kyle Korver: One of the best marksmen in the NBA, Korver has an elite skill set for shooting, and has been making clutch shots for his team all year long. He made his first all-star appearance this year. A long over due appearance.

6. Monta Ellis: When you take a look at Monta's Career stats, you'll probably find yourself puzzled as to why he has never made an all-star appearance. That is the exact epitome of his career, he has always been over-looked. But in a league that seems short on elite or even adequate starting two's, there is no denying Ellis is in the top half of the leagues two guards.

7. Joe Johnson: Johnson's Nets team has been on a roll lately as they push for that last playoff spot in the eastern conference. A lot of that has to do with Johnson, and his "big 3" counter parts D-Will, and Brook Lopez. Johnson who quietly has had a great career, is a savvy vet that can still take over games from time to time, and is battle tested with playoff experience.

8. DeMar DeRozan: It seems like DeRozan should be better than what he is at this point in his career. He is a freak athlete, great defender, and gets to the basket. However his inconsistency with his jump shot, and inconsistent assertiveness, prevents him from being the true number one option of his team.

9. Kevin Martin: Martin is a crafty vet, who has an arsenal of offensive moves. He is a poor defender, but if he were even an average one, he'd probably be higher on this list.

10. J.R. Smith: Boy a change of scenery has made a world of difference in J.R. Smiths career. Its amazing how putting him in the right system where he's not asked to do much, but defend, and be a 4th or 5th option, has helped him thrive this season with the Cavs.

11.Brandon Knight: Knight has been injured this season, but at this point in the rankings Knight is one of the only good options left. He has had an all-star worthy season when he is on the court, and he seems to have turned the corner in terms of being consistent.

12. Eric Gordon: It wasn't long ago that Gordon was an intriguing prospect out of Indiana that every team in the lottery was considering drafting. Many thought he would become an all-star player with a great future. It seemed that Gordon was going to live up to those expectations early on. But as of late we've only seen flashes of what could be if he were to bring "it" every night. Instead we get a guy who plays well but not nearly as good as he should be. However he is still better than any one else left to choose from at the two guard position.

13.Victor Olidapo: It seems like Olidapo is not too far away from having a breakout year that will propel him to jump 5 spots up in these rankings. He's still young and has a scorers mentality, he should be even better within the next couple of seasons.

14. Bradley Beal: Beal is only 21 years old, but he's not as good yet as he was hyped up to be coming out of college. He is a former number 3 overall pick, but I have the feeling he'll always be the player that he is now, solid, reliable, but nothing special.

15. Ben Mclemore: I was huge fan of Mclemore's since he came out of Kansas. He continues to make strides as a young player this season with the Kings, and seems to be one of there future core pieces that they would like to build around, on their rebuilding team.

16. Arron Afflalo: Afflalo can come off screens and shoot well. He can play some defense. He does all the little things you ask of him and is a great role player, who can give you 20 points on any given night.

17. JJ Reddick: Reddick and Afflalo are actually very similar players in terms of style of play, but I gave the edge to Afflalo, because he is a better defender than Reddick.

18. Rodney Hood: Look out for Rodney Hood. He is one of the players on this list who can soon find himself jumping up these rankings in the near future. With a hot streak of 20 point games lately, and a high level of assertiveness for a rookie, Hood has definitely shown us all what he has the potential to become if he sticks with it.

19. Dion Waiters: The Dion Waiters to Dwyane Wade comparisons may have been a little exaggerated, Waiters is a Jekyll and Hyde kind of player. When he's on, he's hard to contain, and when he's off, he just looks like a below average player out there on the court.

20. Danny Green: Yes Danny Green is a champion. He Plays on a great team. But he is very one dimensional. He's a really good spot-up shooter. If he's not shooting it well, he is of no use for an NBA roster.

21. Avery Bradley: Bradley got himself a nice little contract from the Celtics this off-season. But of course the Celtics will soon realize their mistake as Bradley has already hit his ceiling and isn't going to get any better than he already is. However he plays solid defense and has improved his three point shot.

22. Jordan Clarkson: There's been some buzz surrounding Clarkson. But I'm not buying it. He plays on one of the worst teams in the NBA, and someone, even on the bad teams, has to do the scoring. When I look at Clarkson play, I see nothing more than an average starter who would be a great scorer off the bench on good team.

23. Khris Middleton: Middleton is a good all around guard who won't wow you in anything. He rebounds and defends well at his position.

24. Kentavious Caldwell Pope: Pope seems like another Danny Green part two. If he's not hitting his shots he doesn't really bring anything else of value to the court. He relies mostly off the catch and shoot, instead of creating for himself.

25. Randy Foye: Foye has never lived up to the expectations that came with him as a the 7th pick in the 2006 NBA draft. He is in the bottom half of the league when it comes to two guards and doesn't seem to play with, or display any passion out there on the court.

26. Gerald Henderson: Henderson just lacks the athleticism and speed to be anything other than an average two guard in the NBA. He plays hard though, does what is asked of him out on the court, and is a good teammate.

27. Courtney Lee: Lee has always been a good player to have on your team. He can come off screens and shoot well at times. He is a solid role player who is better suited in a bench role, not a starter.

28. C.J. Miles: Its almost hard to believe that Miles is still only 27 years old. However he is still the same player he was coming out of high school. An unfinished product who never really developed offensive versatility.

29. Langston Galloway: Galloway has been impressive at times for the Knicks this year. As a Knick fan he has intrigued me with his defense and poise out on the court. I'm interested in him coming back for the Knicks next season to see what he can do on a winning team,

30. Robert Covington: Covington rounds out the list and will most likely be fighting for a roster spot next year.