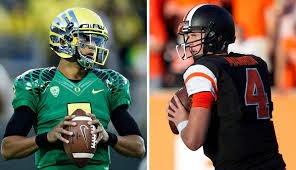 The college football season is over and NFL teams, scouts, owners, and GM's are ready to start taking a closer look at the prospects on their draft board. Here is a look at my QB "draft board", and who my highest top 5 rated prospects are at the QB position.

1) Jameis Winston, Florida State:
Winston is your prototypical drop back passer whose skill set immediately translates to the NFL level. At 6-4, 231 pounds, he has the physical tools, strength and height to look over a defense, stay strong in the pocket, while getting hit, and delivering accurate balls on a consistent basis. He does have a history of off the field issues. However if it were not for the off-field concerns, Winston would easily be viewed as a can't miss prospect.
Projected round: Top 3 Pick

2) Brett Hundley, UCLA:
This might surprise some that I would put Hundley over Mariota. But the truth is Mariota isn't even my 3rd rated QB either. In fact the reason why I have Hundley at number two is for some of the same reasons I have Winston at number one, they're both at the very least good pocket passers. To have a chance at producing and have consistent success at the NFL level, you have to be able to play from within the pocket. Hundley can very well do that and then some. He has a strong arm, good foot work, and fits the ball into tight windows. He does have a pretty slow release and needs to work better through his progressions. He has top ten talent, but will not go that high. The team that does take him will get a steal in my opinion.
Projected round: 2nd-3rd

3) Sean Mannion, Oregon State:
Mannion has the height you look for in a QB prospect, though his frame is rather thin. He is a reliable mature leader who can come in, learn a system, and be the back-up from day one. He makes smart decisions with the ball but doesn't really blow you away in any particular category. A perfect comparison to Mannion is Mike Glennon, a serviceable NFL starter, and great back-up.
Projected round: 4th round

4) Marcus Mariota, Oregon:
Mariota does some nice quality things you look for in a project QB prospect, that you one day can turn into a quality NFL starter. The problem is, you don't draft project QB's like Mariota in the first two rounds. He doesn't throw to tight windows, his accuracy goes down when he throws from the pocket, and he was never really asked to go through progressions after his first option or two. All these things are essential to being successful at the NFL level, and the team that does take him in the first round is betting on his physical tools, and upside. It is a risk I would not take with my teams first round pick let alone top 10. He is in my opinion a 3rd round prospect that will be vastly over-drafted.
Projected round: Top 10 Pick

5) Garrett Grayson, Colorado State:
Like Mariota, Grayson does some things that get you excited for what he can become in the future, but is a project. He has good pocket awareness, and can take snaps from under center. However his accuracy is inconsistent, and he doesn't throw a great deep ball. If coached up well, Grayson can compete for a starting job 2 years from now.
Projected round: 3rd round