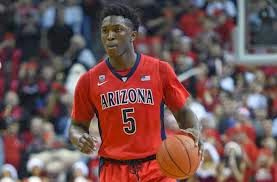 Player Comparison: Latrell Sprewell
Sprewell was a physical specimen that could intimidate you with his size, strength and
toughness. He was a gifted scorer attacking the basket using his strength and getting to the
foul-line. Johnson shares these same qualities and has all-star potential if he can become
a more consistent outside shooter, but not rely on the jump-shot too often instead of using
his strength to get to the basket.