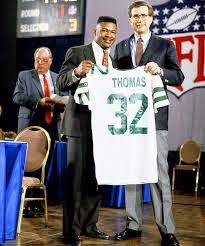 Click Here! Genaosportbuzz Genaosportbuzz There have always been a number of hyped up NFL first round picks that have never bought to fruition the high expectations that comes with being a high first round in the NFL draft. Some of these players come into the NFL and are able to produce and live up to the expectations. But the reality is  not every player, coach, or team succeeds in the draft. Like any other sport there are winners and losers. Players who produce and players that don't produce. The draft is basically a gamble teams take when making their decisions on draft night.

So  here are some of the biggest running back flops in NFL draft history:

1) Ki-Jana Carter, Cincinnati Bengals, 1995 NFL draft, 1st overall pick:
Carter is the first of many former Penn State running- backs on this list. He
rushed for 1,144 career NFL yards, which is significantly less then his 1994 college
total of 1,539. Not hard to see why he's number one on this list.

2) Blair Thomas, New York Jets, 1990 NFL draft, 2nd overall pick:
Get ready folks because the "run" on "running back"  busts from Penn State is
just getting started.This guy was no different and was out of the NFL by 1995. On
the positive side his career stats are better than Carter's career stats.

3) Curtis Enis, Chicago Bears, 1998 NFL draft, 5th overall pick:
I know. This is getting ridiculous, but what can I say? This is the top NFL running
back busts, and Enis was a huge one. He only lasted three seasons with the Bears and
that was it for his career.

4) Lawrence Phillips, St. Louis Rams, 1996 NFL draft, 6th overall pick:
Its one thing to be atrocious at your professional job. It's another to be a criminal while
you're at it. Beating his girlfriend, and driving into teenagers, you won't find this guy
anywhere but prison now a days, as he's currently on a 31 year sentence. This guy
was a headcase.

5) Larry Stegent, St Louis Cardinals, 1970 NFL draft, 8th overall pick:
Most draft busts have pedestrian career stats. That doesn't appear to be the problem for
Stegent. He doesn't have much career stats. 7 games played and 1 NFL season. Talk about
a waste of draft a pick.

6) D.J Dozier, Minnesota Vikings, 1987 NFL draft, 14th overall pick:
Yet another Penn State running back flop. Its the curse of legend, the curse of all curses
and the NFL draft bust factory for running back prospects. After flopping out of the NFL
Dozier tried his luck in the MLB with the NY Mets in 1992. No luck there either.

7) Michael Haddix, Philadelphia Eagles, 1983 NFL draft, 8th overall pick:
It's amazing that Haddix lasted 8 years in the NFL. Yet he only rushed for 1,635 yards
for his entire career.

8) Rashan Salaam, Chicago Bears, 1995 NFL draft, 21st overall pick:
The biggest tease on this list as he was able to put up some great numbers as a rookie.
He rushed for 1,034 yards his rookie season. He wasn't able to come close to duplicating
that level of production during his last three seasons in the NFL combined.

9) Chris Perry, Cincinnati Bengals, 2004 NFL draft, 25th overall pick:
I'll make this quicker than his NFL career. He played 4 seasons in the NFL for the
Bengals, and only had 606 career rushing yards. There that's it.

10) Ron Dayne, New York Giants, 2000 NFL draft, 11th overall pick:
Dayne's numbers might actually be respectable if he was an undrafted free agent. But
for the 11th overall pick his level of production was down right unacceptable.