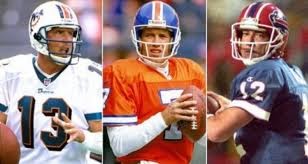 The NFL has a rich history of great players that have played in the league, and left legendary impacts for the respective teams they have played for. In a league where you have 300 or more new players every year added to rosters in training camp, it is an accomplishment in its self to make the final roster in highly competitive league. Here is a list of some of the best players to ever play the quarterback position.

1) John Elway: Some might be surprised that I have Elway over Montana. However
Elway never played with a hall of fame Caliber wide-out. Elway only played one more
season then Montana yet threw for more than 10,000 more career yards, and 27 more
touchdown passes. Elway also accumulated 31 more career wins than Montana.
For those who need to bring up Montana's Superbowl's, yes he one 2 more but
Elway went to 1 more than Montana did, and dragged the Broncos to three Superbowl's
in the 80's. Elway was the first of his kind, he set the standard for what scouts dream
of today in an NFL prospect and was the highest rated prospect to ever enter
the NFL draft for a reason. He can throw, run, and his clutch performances are stuff
of legend, as his 46 game winning drives suggest. He carried a franchise by the throat and completely turned it around. There was simply no one who could match Elway in
skill. The greatest quarterback to ever play.


2) Tom Brady: Six Superbowl appearances. Four Superbowl wins. 3 time
Superbowl MVP. Ten time pro-bowler. 392 career touchdown passes. Tom Brady is one
of the most accurate, clutch, quarterbacks to ever play the game and his resume speaks for itself.


3) Joe Montana: Finally the man who most deem to be the best quarterback of all-time.
Like Brady, Montana was a winner and championship player in his time with the 49ers.
A guy you can trust in big situations, a 4 time Superbowl champ, and 3 time Superbowl
MVP.


4) Peyton Manning: It's easy to pick on Manning for not having the playoff or
championship pedigree that the other guys above him on this list have. But that's exactly
what we would be doing is knit-picking. Peyton is with out doubt the most cerebral
quarterback to ever play the game and his ability to command a huddle and line
of scrimmage is like nothing anyone's ever seen. He is a 5 time MVP, and is without
a doubt the greatest regular season quarterback of all-time. You can say what you
want about his playoff resume, but he did win a Superbowl in the 2006 season and
he easily without question makes this list.


5) Dan Marino: The QB almost every team passed on in the first round of that legendary
1983 NFL draft that featured 3 Hall of fame quarterbacks, Marino included. Marino was
before his time, consistently throwing for over 4000 yards in an era where it wasn't that
common to see a QB throwing for that many yards. Marino was like Peyton, a great
regular season QB, and had he been able to win a Superbowl or two, would give Elway
a run for his money as the best QB to ever play.


6) Brett Favre: What kind of list would this be if it did not include Brett Favre? Favre
was the original leader in career touchdown passes until Peyton broke his record. A lot
of people forget that for about three year span from 1995-1997 Favre was considered the
best QB in the league. He holds the record for most consecutive NFL starts at the
QB position and legendary gunslinger during his time with the packers.


7) Johnny Unitas: The original "Johnny Football" Unitas was throwing for 3000 yards
in a season at time where doing so wasn't common especially in a 12 game season. He
was a 3 time champion and had one of the highest football I.Q's you'll see in a QB.


8) Troy Aikman: This one might spark some controversy for some. However Aikman
without a doubt deserves to be on this list. detractors might say he played with
Emmit Smith and Michael Irvin, but when you watch the tape you see a QB with poise,
and command. You see a QB that had he played for any other team that relied more on
the pass would have still won championships, and put up better career stats. He is the
most accurate QB I have seen on tape and is the greatest QB in Cowboys History.


9) Roger Staubach: Staubach didn't become the full time starter until his third season at
29 years old, which makes his resume all the more impressive. An impressive 85-29
career record as the starting QB for the Cowboys and won two Superbowl's during
his career.

10) Jim Kelly: Kelly was a part of that famous 1983 NFL Draft that featured Marino
and Elway. Like Marino unfortunately, Kelly was never able to win a Superbowl. One
thing Kelly did do that no other QB in the history of the NFL has done, was take his
team to four consecutive Superbowl appearances. A feat to which we'll most likely
never see again. He accumulated 101 career wins as the Bills QB despite missing
his first three seasons playing in the USFL. He is one of the most under appreciated
QB's to ever play.


So there you have it the Top Ten NFL Quarter Backs Of All-Time. Let me know
what you guys think. Who is missing from this list? Who do you think belongs
on the list? Leave a comment below.